Dry Tortugas National Park presents a unique challenge: how do you preserve an area where weather and predator damage are out of the rangers’ control?

Dry Tortugas National Park, located about 70 miles west of Key West in the Gulf of Mexico, covers 100 sq miles of ocean and seven small islands. A whopping 99% of the park is actually underwater. 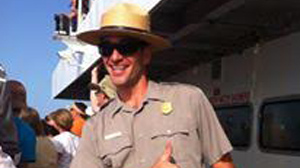 Dry Tortugas is also home to the third largest barrier reef in the world; nurse sharks, sea turtles and snapper-grouper use the area to spawn. Because of that, the park presents a unique challenge for the rangers that call the islands home: how do you preserve an underwater area, where weather and predator damage are out of the rangers’ control?

Enter Nick Fuechsel, who has been an interpretive ranger at the Dry Tortugas for three years. As part of a dive team that supports the scientists who use the park as their base for experiments, Fuechsel sets up buoys to mark off research areas and maintains floating moorings for boats to use instead of anchoring. In 2007, almost half of Dry Tortugas was set aside as a research area dedicated to the preservation of its natural resources.

One of the most successful and well-known studies done in Dry Tortugas centred on the nurse shark population. Unlike other shark species, which are migratory, the mild-mannered nurse sharks are born, forage, mate and live their lives around the islands. The closed off areas that Fuechsel maintains helps to protect the mating sharks and newborns, and allows scientists to study their behaviour, population and habitat.

At times, Fuechsel’s most important role is to keep park visitors informed of the research happening at the park, while educating them on the threats and the small steps they can take to help minimize human impact.

“We have the difficult job of finding the balance between preserving and protecting for future generations, and allowing the public to enjoy their public lands,” said Fuechsel.

The islands are also a bird-watcher’s paradise: masked boobies, city terns and the magnificent frigatebird all call Dry Tortugas home, and the sooty tern and the brown noddy tern use Dry Tortugas as their only continental US nesting site. Researchers are using tagging and satellite tracking to understand where these birds go once they leave the Dry Tortugas, how and where they forage, and why they use the small islands as a home base.

“The more info we know about what different species are doing – how they live, where they mate, where they forage – the more we can do to take management actions to help protect them,” Fuechsel said.

One of the most remote US National Parks, Dry Tortugas can only be reached by boat or seaplane, and the only residents are park rangers. They have to use satellite phones with spotty reception and limited internet access to stay in contact with the mainland.

For every six days at home, Fuechsel spends eight days on the island, away from his wife and three daughters. But the remoteness of the Dry Tortugas is exactly what makes it special, Fuechsel said.

“I feel privileged to live in the most beautiful place in our country. Not only do I get to play and explore and live in the magical underwater wonderland that is Dry Tortugas, I also get to protect it and share it with others,” he said. “Sure, I have to sacrifice some things, like everyone has to sacrifice some things, but I believe in what I do.”

If you liked this story, sign up for the weekly bbc.com features newsletter, called “If You Only Read 6 Things This Week”. A handpicked selection of stories from BBC Future, Earth, Culture, Capital, Travel and Autos, delivered to your inbox every Friday.